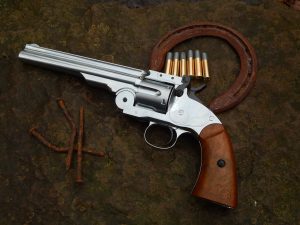 During  trip to the NRA National Sporting Arms Museum located in the Bass Pro Shop in Springfield, Missouri, I viewed President Roosevelt’s S&W Model 3 revolver. It was an amazing looking firearm, and I wished an airgun replica was manufactured.

In the late 1800’s, Major George Schofield of the 10th Cavalry, designed the revolver as an improvement over Smith & Wesson’s No. 3 “American” model firearm. Fortunately for us airgunners, in 2016 Bear River introduced an air pistol replica of the classic  Schofield top break revolver. 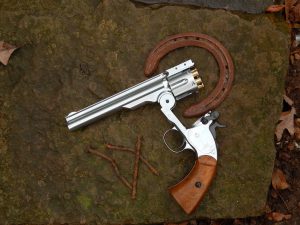 The Schofield is powered by a 12 gram CO2 cartridge housed in the grip. This air pistols fires BBs out of  a smooth bore barrel.  A single BB is loaded into the “bullet” end of the cartridge. On a 72 degree day my Scholfield replica produced 60 usable shot and averaged around 420 fps.

In addition to a nickel finish, the Bear River replica of the Scholfield is also available in a Gunmetal gray finish. Both models come with plastic simulated wood grain grips. As for accessories mock Ivory grips, BB revolver shells, and leather holsters can be found at online airgun retailers.

While not as iconic as the Peacemaker, the Schofield, appeared in many westerns. Remember the Schofield Kid, from the Clint Eastwood movie titled “Unforgiven”? The revolver was also the handgun of choice by Texas Ranger Hoby Gilman, played by actor Robert Culp,  in the 1950’s “Trackdown” TV series. Fortunately for us, many of these westerns can be still be watched on several TV channels every Saturday morning.