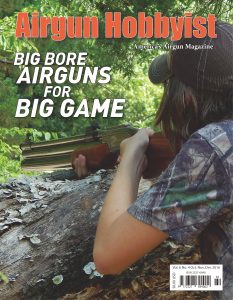 After an already successful hunt, and still having some early morning light left, Terry Tate asked me if I wanted to try my hand at getting a hog. I remember my hunting trips with my father and after seeing how excited Ben was about getting his first hog, I declined Terry’s offer and instead suggested that Ben give it another try. It was more important to me to pass down the hunting tradition to my son, and I didn’t mind being in the background hunting with my camera instead.

Ben was delighted to try again. This time with the Dragon Claw. It’s a PCP powered, single shot air rifle designed to fire a .50 caliber lead projectile. But now it can fire something new, an arrow!

Just prior to our trip to Texas, a Dragon Claw air rifle was provided to us from Air Venturi, along with six of the new Air Venturi Air Bolts.  The bolts weigh approximately 450 grains with the field tip installed and travel at an average velocity of 450 fps (which is faster than the typical crossbow or compound bow) out of our Dragon Claw producing just over 200 foot pounds of energy. We were also told after the hunt that if we oiled the nock (the butt of the arrow) we would have been shooting upwards of 480 fps! That being so new we did not even get instructions with the Air Bolts.

After un-boxing the Dragon Claw, and before heading back to the woods, the dual air tubes were aired up using a fill tank in the bed of the truck. The dual chambers would give more air if Ben needed  extra shots.

Next, Ben shot the air rifle several times with the Air Bolts and found it grouped well right out of the box at 25 yards.  A scope could have been mounted on the 11mm dovetail, but we opted to stick with the Dragon Claw’s open sights as it would be perfect for Ben shooting at close distances.

An Air Bolt was then loaded from the muzzle and slid all the way down to the breach.  The target heads used for practice were removed from the Air Bolts and broad heads installed for hunting. Next, Ben cocked the Dragon Claw to its full power setting keeping the safety on, we set off.

A gentle breeze kept us a bit cooler as we ventured back into the woods as the temperature was nearing 80 degrees and it was not yet 10 am. Terry was thinking that the hogs would soon be bedding down near water. He was correct as we quietly approached a clearing, they came into view.

Across from a watering hole, several hogs appeared about 25 yards away. Ben picked out a hog and pulled the trigger. Just prior to the trigger being pulled, something startled the hogs. His arrow just barely missed the smaller boar, embedding itself in a log.  Those hogs move fast when scared!

Since the Dragon Claw was fairly light at around 8.5 pounds and with an overall length of 42” it was easy for Ben to maneuver to position himself in a different location to wait for another shot.

A little later in the morning, a boar came into view. Ben lined up for a second shot and fired.  From behind, I heard the shot, followed by a very brief squeal. I then looked over to see a hog down in the watering hole.

The thing Ben remembered most, was the sound of the impact on the Air Bolt over the round ball.  “Where the impact of the ball was fairly quiet, I knew for sure I hit the second one. It made a huge thud sound.  The boar went down after just a little distance.” he said.

We collected the boar and relocated it to Terry’s skinning rack.  This time Terry guided Ben in processing the boar.  He was able to skin it and do most of the processing himself.  Terry taught him which knives work best.  My old 7-1/2” hunting knife was too big and our serrated knife cut too aggressively. Experience has now told us what type of knife to purchase for our hunt next year.

With both coolers filled with pork and the heat of the summer day quickly approaching our hunt was over. Before we drove off, Terry said to us “I’m looking forward to you coming back tomorrow and hunting again, hopefully the weather will not be so hot.”

Later that afternoon when we got back to the hotel, I could see that Ben was somewhat different. After the excitement of the hunt, now going to a normal routine seemed even more mundane to him. I told him “I remember how you feel. I felt the same after shooting my first deer while hunting with my dad decades ago.” Somehow watching TV pales in comparison to all the adventure and excitement of a hunt. I gave him my Buck knife (used by me in the ‘80s and him today) and said to him, hopefully someday you’ll be able to pass this knife down too.

This adventure reminds me of a quote by Lucas McCain on The Rifleman TV show. “When you see an old man dozing in the sun and he looks like he’s smiling, well, he’s thinking back on his growing up time-thinking back and living it all over again.  I want you to have that time. I want you to be a boy while you are a boy.”

The trip was both my “thinking back” time and Ben’s “growing up” time. We would like to thank Terry Tate and Luke Clayton for helping us create these memories.  Terry’s ranch was amazing to hunt on. Luke Clayton’s book “From Kill to Grill” was a valuable read in preparing for the hunt.  We’d also like to thank Air Venturi for sending us the Dragon Claw and being one of the very first (if not the first) to be able to take a wild boar using the .50 caliber big bore and Air Bolt.