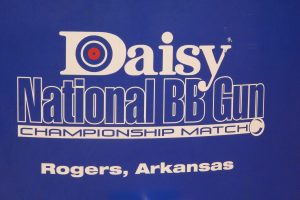 Teams
Seventy-one teams comprised of competitors, coaches and their families were in Rogers, Arkansas just prior to the 4th of July, to attend the 52nd Annual Daisy National BB Gun Championship Match. Each competitor was one of the most proficient five meter BB gun shooters in the USA.

Practice
Practice sessions were held on both Friday and Saturday. Prior to using their air rifle, it had to go through an inspection process where it was checked for proper sights, weight and a variety of other criteria. Each competitor at the Nationals used a muzzle loaded single shot BB gun called the Daisy AVANTI Champion Model 499. It is billed as the world’s most accurate BB gun.
During the practice session, we noticed that many of the teams had their own slogan on their shirts. A notable was “Practice like you’ve never won. Perform like you’ve never lost.”

Opening Ceremonies
On Saturday July 1st an estimated 2,000 people attended the opening ceremonies. Like prior years, the ceremony started with color guard bringing the American flag to the stage. Once the flag was safely in place, a prayer was said, along with the Pledge of Allegiance followed by the singing of the National Anthem.

Several Daisy employees welcomed the teams with inspirational speeches. Keith Higginbotham, the President of Gamo/Daisy had many memorable lines. Speaking of Daisy, he said “It’s everyone’s first gun. It’s the front door to the shooting sports.” Referencing the Nationals, Keith said “This great curriculum not only teaches young people how to shoot but, first and foremost, teaches them proper gun handling and gun safety.” He continued with “…the Boy Scouts of America, with whom we recently cemented an official partnership, by conservation organizations nationwide that our ranges and products, and by individual, caring moms and dads who know the value of enjoyment that comes from simply shooting a BB gun. We estimate that each year a million people receive the message that we – and that you- are dedicated to teaching.” Keith went on to say “If (that’s a big if) the mainstream media ever becomes interested in the positive effects of a great shooting program and how we-the-people are educating people on the proper behavior with the use of guns, they need look no further than this great program on which you and Daisy place such emphasis.”

Next each team took to the stage to be announced and photographed. Also, competitions were going on before the first BB was fired: a best theme and best costume contest. These teams had put some serious work into their costumes and it was difficult for the judges to pick a winner.

Prior to the conclusion of the ceremonies, an oath recited by the competitors “I accept the responsibility and privilege of representing my community and state at the 52nd annual Daisy National BB Gun Championship Match. I will conduct myself safely, on and off the range. I will treat opponents with respect. I will abide by the judgment of match officials. I will live up to the standards of good sportsmanship. I will win with humility. I will lose with grace. I will do both with dignity.”

Painted Gun Contest
Some of the competitors had custom paint jobs on their air rifle and entered the painted gun contest. After a practice session, many left their painted rifles on the firing line with their completed forms. The guns were judged and available to pick up later that afternoon, with the winners being announced during the closing ceremonies.

Competition
The matches began at 8 a.m. on both Sunday and Monday mornings. After a brief sight in, each shooter had ten minutes to fire one BB at ten different bulls-eyes. The competition consisted of four different positions, sitting, standing, kneeling and prone. The various positions were not shot all at the same times. Rather, ten shots would be fired in one position by one person, the range would be cleared and the next team member would come to the line to fire his or her ten shots.

One little boy noticed us taking photos just prior to his match beginning. He looked over and gave us a thumbs up, then got into position, fired his 10 shots, laid down on his shooting mat and quietly waited for the match to conclude.
Another young shooter pulled the first shot, but was able to regain composure and shot multiple bulls-eyes in a row. That sure shows degree of training and coaching that Keith Higginbotham talked about during the opening ceremonies.

Respectful would best describe the competitors. There was never an outburst of emotion whether they shot very well or not as well as they’d hoped. Everyone kept calm after they had fired their last shot and quietly waited at the firing line until the range officer gave the all clear for the current competitors to leave the firing line and the next to approach the line.
Coaches brought seven member teams that include five shooters and two alternates. The competitors ranged from 8 to 15 years of age. Many teams had traveled hundreds or thousands of miles to attend. Daisy awarded $1,000, $1,250 or $1,500 (based on the distance traveled) to each team that qualified, attended and competed at the match. The teams were responsible for the rest of their travel costs. Some teams had local sponsors who help with the expense.

Barter Bar
Sunday evening, the teams had the opportunity to trade items local to their region for other items. Back from last year was Kyle Werst, Sr. V.P of Sales for Daisy at the Daisy table in his Cheez-It chair he bartered for a few years ago.

Closing Ceremonies
On Monday, July 3rd the awards ceremony was held. Medals were presented for first, second, and third place to the highest scoring competitors in each of 4 shooting positions. Several competitors returned to the stage to receive additional medals. Lastly, medals for the top 3 teams were presented.
We would like to thank Daisy Outdoors for inviting us to the event. To quote Keith Higginbotham, President of Gamo/Daisy “My desire is to see this program grow more widespread. I’d like to see a team from every state.” and “Look at what we’ve done… you and Daisy… with this amazing program. Then, let’s look toward the future and see how, together, we can make it even better and more far-reaching.” We could not agree with him more.