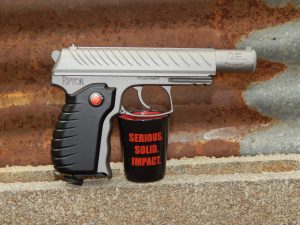 I first laid eyes on the Riptor at the HatsanUSA booth at the 2017 SHOT Show. While there, I asked Daniel Settle of HatsanUSA, “How did you come up with that name and design? “ Daniel replied “It was a result of many hours with our new product development team.”

In the fall of 2017 the Riptor became available for purchase. I contacted HatsanUSA directly and the Riptor was quickly on its way.
Upon opening the box, (yes, this $80 air pistol comes in a nice foam lined cardboard box) I noticed the pistol was not the same color as the prototypes, but instead had a sharp looking metallic silver paint that contrasted nicely with the black plastic grips.

What really attracted me to the Riptor, was its “non-replica appearance”, and I wondered was it retro?, modern? or both? So I asked airgun collector, Larry Hannusch if it looked like anything in his collection. Larry replied “Nothing that I can remember. It certainly does have a space gun like appearance!” I wondered, by looking something like Marvin the Martian’s “disintegrator ray”, would novice shooters be less intimidated?

The Riptor is powered by a 12 gram CO2 cartridge housed in the “all-in-one” magazine that also hold 15 steel BBs and the manual does a good job describing how to load the CO2 and load the BBs. Being old enough to remember watching Marvin the Martian during Saturday Morning cartoons, age and aches have settled in. I found it a little difficult to push the BB follower down and into the lock position. However, I found the blunt end of a ball point pen made the perfect tool for me to use. As my Grandmother used to say “Don’t ever get old”. I didn’t understand what she meant, until it happened to me. But I digress.

On a 72 degree day, I was able to fire five full magazines of 15 BBs. After 75 shoots, the power of the CO2 dropped off and the blow-back action would no longer cock the airgun.

A maximum velocity of 350 fps was recorded using steel BBs, with an average velocity of 285 fps out of the short barrel. Both zinc BBs and H&N Smart Shot BBs worked flawlessly during testing.

The sight are fixed, with the rear having green dots and the front having a red dot painted on. Below is the barrel is a Weaver accessory rail for mounting lasers, lights, or other accessories. For accuracy, I was able to keep most BBs inside a 3 inch square at 3 yards. My grouping is getting better with use and more familiarity with the trigger.

Speaking of the trigger, the Riptor is a single action airgun, pulling the trigger will not move the hammer back. For the pistol to fire, the slide needs to be racked, or the hammer pulled back manually for the first shot, then the blow back action will move the slide backward to cock the hammer after each shot.

Located on the left side of the airgun is the safety and slide stop. After the last BB is fired, the slide stop locks the slide rearward, just like a semi-auto firearm would.

As Marvin the Martian would say “Where’s the Kaboom?”, well, the Riptor uses QuiteEnergy technology to limit the “Kaboom”. The cylindrical portion of the slide houses a single baffle to muffle some of the report of the short barreled airgun. According to my sound meter, the ambient sound level was 53 db “Quite street/Quite office” level. Upon firing the Riptor, the decibel went to 74db “Busy traffic/ Phone ringing” levels. (Having a blow back action, some of the decibel level increase is from the steel slide moving back and forth.)

In my opinion, the Riptor is unique looking and fun to shoot. With a MSRP of $80, it’s also an economical to purchase. I hope HatsanUSA will come out with more CO2 powered airguns in the future.