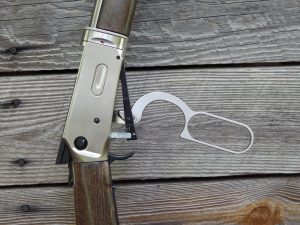 During my childhood, westerns were always on TV and in the movies. And I’d have to say that Winchester ‘73 released in 1950 and starring Jimmy Stewart was among my favorites. The movie centered around the prize of a shooting competition, a perfectly manufactured Winchester repeating rifle.

The Walther Lever Action air rifle is a finely crafted replica of the famous Winchester 1894 firearm. We’ll take a look at the newest variant of the Walther lever action.

But first, there’s a little back story to this particular Walther Lever Action. This air rifle was picked up at the Umarex USA facility during a tour earlier this year. And there’s a very good chance that this air rifle was used on American Airgunner TV show in a segment called “Wild West Shootout” 2012 Episode 6. While there’s no way to be certain Justin Biddle felt that there was a good possibility that it could have been one of the two Lever Actions used.

The Walther Lever Action was introduced in 2002. It was powered by dual 12 gram CO2 cartridges and was offered in a variety of variations including barrel lengths and finishes.

In 2011,the Walther Lever Action’s two 12 gram CO2 cartridge system was replaced by the use of a single 88 gram CO2 cylinder. Also introduced that year was a nickel plated version. The nickel is called the “steel finish” and is a Umarex-special, very light colored nickel finish. After being nickel plated, it is brushed to resemble a stainless steel finish. The nickel finish as well as the few blued parts on our sample was flawless.

The fit and finish of the German made air rifle was equally impressive. The seams between wood and metal was virtually non existent. The barrel bands, front and rear sight are made from plastic as well as the large butt plate. The plastic sights do not detract from the air rifle’s appearance. In my opinion, the plastic butt plate needs to be a little more elegant looking. Perhaps a nickel spacer and a rubber butt pad?

On the nickel finish model, the beech wood stock is a rich dark walnut colored. that contrasts nice with the “steel finish”. While the blued Walther Lever Action, the stock has a brown/yellow finish that looks very nice against the blue finish. The sleek form and straight stock resemble classic Winchester style.

Differing from the original Winchester rifles, the Walther unitizes a cross bolt safety. By pushing the cross bolt to the left, the air rifle is on fire, and pushing it to the right, it’s on safe. There is also an additional safety designed into the Walther where the trigger can not be pulled when the loading gate is open.

The movement of the lever is silky smooth with the feel and cycling sound of high caliber firearm. The Walther consistently rotated each of the 8 shot cylinder magazine into place, even under fast cycling of the air rifle. The Walther lends itself very well to gallery style shooting. The rifle can be cycled why being kept shouldered and with the sights on target.

The Walther Lever Action comes with a set of unique accessories. Included are two 8 shot rotary magazines. (The same that are also used in Umarex replica pistols.) Also included is a pellet seating tool to seat pellets consistently into the 8 shot magazine. There is a key to remove the butt plate and CO2 capsule pliers to install and remove the 88 gram CO2 cartridges.

While I did not count the total number of pellets that can be fired using the 88 gram CO2 cartridge, it was easily in the 250 to 300 shot range. Having so much CO2 in the Walther adds to it enjoy ability. Magazine after magazine could be fired quickly without a noticeable drop in velocity. I was able to get multiple shooting sessions firing 10 magazines per session on one 88 gram CO2 cartridge.

When the Lever Action was introduced in 2002, the inner space in the rear stock fit only for two 12 gram capsules of CO2. The change to the 88 gram tanks was done in 2010. In the European market it is still possible to use 2 12 g-capsules instead of the 88-g-tank with the help of the adapter.

Oddly enough the windage is adjusted by moving the front sight to the left and the elevation is adjusted in rear sight like normal. The front sight is also protected by a removable hood. The sights are well matched and make for an accurate shooting rifle.

In the velocity department, using the RWS 8.2 grain pellets, the Walther averaged 560 fps. Firing the same pellets, at 20 yards, the air rifle would penetrate both sides of an empty vegetable can.

The Walther is a relatively quite airgun and is well suited for backyard plinking. It packs enough punch to take out small pests too. It may not be the best choice for target shooing, but it’s extremely entertaining doing some quick action shooting using reactive targets. The functioning of the Walther Lever Action was flawless and the attention to detail makes the Walther Lever Action the ultimate in airgun replicas of the Winchester 1894. It’s definitely one to put on your “Wanted” list.