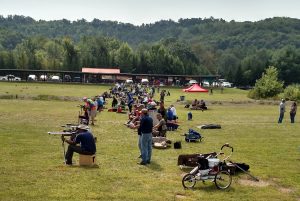 The Pyramyd Air Cup, is one of the premier yearly events of air gunning in the United States. It is sponsored by Pyramyd Air, a retailer of air guns and related supplies located in Solon, Ohio.
Located at the Tusco Rifle Club in New Philadelphia, Ohio, this three-day event qualified as an AAFTA (American Airgun Field Target Association) Grand Prix. The AAFTA Grand Prix, tally’s the scores of all the qualifying air gun events and awards the top winners throughout the country per class. Both in rifle and pistol field target.

The Pyramyd Air Cup, however, is not just a field target event! On day one, Friday, Aug 25th, competitors met old friends and sighted in their rifles for the field target events of the next two days. They met representatives of several manufacturers, who displayed their products, answered questions, and offered free items. In the afternoon, the Pay Day Challenge was conducted.

The Pay Day Challenge consisted of shooters testing their skill with rifles they may not have been familiar with. The guns were equipped with Diopter sights and most of us had never shot with them. Sights consists of a “peep” sight in the rear and a hooded sight in the front with a round insert, it was tough! This year’s setup was different from last year. You had three stations with the same rifles which were 10-meter set ups at around 5-6-foot pounds of energy. The three Rat-on-The-Run targets were set out at around 10-15 yards, each having a different size “Kill Zone” to shoot at. The first target’s 1 ½” kill zone, was worth 1 point. The second target’s 1” kill zone was worth 2 points, and the third target at ½” was worth 3 points. You would shoot twice at each target for a total 12 points, if hitting all targets down. Easier said than done!

David Slade, owner of Airgunwerks, famous US/Brit air gun tuner, and dare I say “Old man” of the sport, excelled and won. I missed every shot! I was talking to Rossi Morreale, of American Airgunner TV show, about my poor performance with the unfamiliar “peep” style sights. He asked me if I would mind embarrassing myself on camera. Being too old to care I said yes!

Day two on Saturday the 26th found the field target event in the morning, and the Pyramyd Air “Gunslynger” event is held in the afternoon.

That morning, after sighting in, the field target match started. On the first day of the field target event, we saw fairly strong winds, and most were disappointed with their scores. Competitors experienced shifting winds, increasing as the day went on.

The courses were 13 lanes with 2 knock-down, pull to reset, metal targets. A point is scored when the target is hit in the “Kill Zone” opening, and the target falls. A total of 52 is the max for the match. A miss does not get counted and a zero is marked on the score card. This all happens within a five-minute time frame, ruled by a digital timer at each lane.

When told to start, the competitors shoot the silhouettes in any order they want, requiring to knock the targets down. When one clears all the targets, the match is stopped. Then the next heat starts until only two remain. The fun is watching the pellets fly out of people’s hands like fireworks, trying to load the guns fast! Last year I had about a half a tin of pellets around me on the bench! I decided not to shoot it this year.

After the matches on Saturday, there was a banquet at the local Elks club for the competitors. Besides the meet and greet, bar, appetizers, and dinner, there were tickets available for prizes supplied by Leaper/UTG, Hawke Optics and Pyramyd Air.

Afterward, the finals of the Gunslynger are shot. When these two events are done and the two days tallied, the awards are presented to all the winners.

Fun, exciting, and challenging are the words I use to describe this event! This was my second year competing here, and I will be back every year I can make it.

Pyramyd Air, Tyler Patner, and the entire Pyramyd Air crew, do a wonderful job putting on this event. I heard rumors of some things being different that will really make it special for next year!?

You owe it to yourself to make the trip here to Ohio. Great folks to meet and old friends to compete with.