Sheridan: The end of an era

While looking at Crosman’s 2013 airgun catalog, I discovered that something was missing. There was no
mention of the Sheridan Blue Streak. Hoping this was just an omission. I contacted Crosman and learned that the Sheridan line is being discontinued in 2013.

Once the disbelief passed, I ordered a Blue Streak so I could own one of the last in the fine line of Sheridan’s. But simply ordering a Blue Streak was not enough. I asked Laura Evans, Marketing Coordinator at Crosman for a very special favor. My request was to have the person who built my Blue
Streak, autograph the box.

A few days later I contacted Chip Hunnicutt, Web & Social Media Manager at Crosman to get his thoughts on Airgun Hobbyist Magazine doing a tribute to the Sheridan and also to immortalize the employees who build the airguns, right here is in the USA. Chip’s response was “That’s a great request.” During a tour of the Crosman facility last year, I had the privilege to meet the people who build these wonderful
airguns. However, I didn’t take photos in the assembly area. Upon my request, Chip was able to provide me with numerous photos used in this article.

A brief chronology of Sheridan airguns follows. The Sheridan airgun company was founded in 1945 in Racine Wisconsin by Ed Wackenhagen and Bob Kraus. Their goal was to make the finest American made pneumatic air rifles. In 1947 they introduced the Model A “Super Grade”. The material used in the Model A were of the highest quality, this included bronze alloy chosen for its superior properties. Followed by the Model B “Sporter” in 1948 to 1951. It is believed that Crosman designed the model 108, Town and
Country to compete with Sheridan’s model A and B.

Sheridan Model F and FB CO2 powered rifles started production in 1975. The F was nickel finished, while the FB had a blue finish. A FW was also available with polished nickel and a Williams peep sight.

In 1977, the Benjamin Air Rifle Company bought Sheridan. Benjamin continued production of the C Series under the Sheridan name.

Crosman purchased the Benjamin Air Rifle Company in 1992 and continued to produce the C9 Series under the name of Benjamin/Sheridan. A few years back, Crosman discontinued the “Silver Streak” and this year, the “Blue Streak”.

Great reference books for the Sheridan include “Sheridan – Classic American Air Rifles” by UJ Backus and
“Know Your Sheridan Rifles & Pistols” by Ron Elbe. As many owners of the Sheridan Air Rifle know that
these airguns last. Their owners have had them since they were little and even though there are other options out there, this is their go to airgun. Many owners look at their air rifle with the fond memories of childhood in their eyes. It is worth more to them then the book value says they will ever be.

In the next few pages, you’ll get to see the people, parts, equipment used to build the last of the Sheridan line.

“I wanted a Sheridan as a kid, but couldn’t afford one.
So, when I returned from Germany in 1978, I bought a Blue
Streak that I still have. I taught my wife, Edith, to shoot it
and she killed many rats and mice around our house. That
rifle is the “go-to” airgun in the Gaylord household.
– Tom Gaylord”

“It is because of the quality and workmanship of the
Sheridan’s past that the name will live on.
– UJ Backus”

“I still have the Blue Streak I purchased in 1968.
I haven’t fired it in over 30 years! Yes, your article on
Sheridan is on target. I just might buy another before they
are all gone. Sheridan air rifles are true classics among
airguns and deserve lots of recognition for their solid
performance and quality.
– Jess Galan”

“When I was about a dozen years of age, the newly introduced Sheridan Blue Streak was being advertised in numerous outdoor magazines. An airgun that had the power and accuracy described in those ads was tantalizing but unaffordable. Growing up in a remote area, I could imagine myself roaming the woods with “the aristocrat of air rifles.” I had an airgun, but I wanted a Sheridan. I am pleased to say that I now have several and if I could have only one airgun, it would be a Sheridan.
– James E. House”

“For over half a century, the Sheridan airgun name
has evoked a prestigious sense of pride for the seasoned
airgunner. To own a Sheridan meant that you knew your
airguns, and would not be fully satisfied with anything less.
– Larry Hannusch”

“As a kid, I coveted one of those multi-pump
powerhouses. But alas, all of that brass and walnut and
steel construction made their cost out of my reach and kept
me from owning one until adulthood. There may have been
other models that came before the Sheridan, but it was
sleek and sophisticated. The fact that it was accurate and
hard-hitting was just icing on the cake. I know things must
change and corporate decisions are predicated on market
research and so forth, still, it is sad to see the brand fade
away and I’m sorry to hear the Sheridan line is no more.
– Gordon D. Smith”

“In ‘building a better mouse-trap’ we have
endeavored to produce a more versatile and usable link—
one combining high performance with low-cost shooting—
between the boy’s type air rifle, and the comparatively high
powered cartridge-type fire arms. Each has their respective
field which they are efficiently filling to the benefit of the
shooting fraternity. We feel that the Sheridan Pneumatic
carries on in the same tradition, meeting a want of many
shooters, and of many classes of shooters, from experienced
riflemen, to the average sportsman who would like to have
a safe, practical small bore rifle in the family. We thus hope
that we, in a small way, are contributing something to the
rifle shooting game in general, and to your own particular
pleasure.
– Sheridan Hand Book” 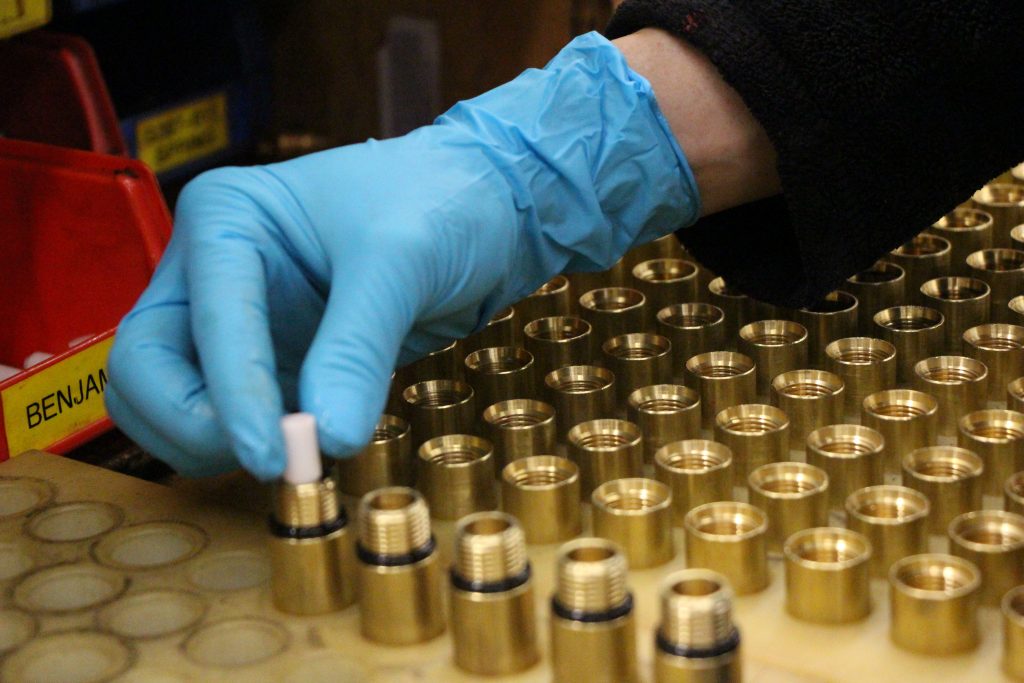 Brass valves are assembled by hand.

“The article on the Sheridan looks good, but it saddens me.
For much of my life (since 1948) I have admired Sheridan air
guns. I really like the ones I have.
– James E. House”

“Any closely fitted mechanism, from a new engine to
a pneumatic rifle, is likely to be somewhat stiff in its action
until used. Moving parts such as the bolt, piston assembly,
trigger release, opening and closing of valves, etc., all
tend to “wear in” to permanent smooth relationship. It is
sound engineering to have tight fits that wear in, rather
than- loose fits that wear out.
– Sheridan Hand Book”

If you’ve purchased a Sheridan CB9, Benjamin 392, or Benjamin 397 in the past few years, chances are that these two people, Aaron Riojas and Cheryl Pragle were the people who built it. In this day and age, it’s nice to see that the airguns are not assembled by machines in some far off country, but instead built
by Americans in the state of New York.