A Visit to the Daisy Museum

A visit to the Daisy Airgun Museum is something every airgunner should do at least once in their life time. During our visit, we had the opportunity to go in before the normal business hours. And our tour was guided by Joe C. Murfin, VP of Public Relation at Daisy, and author of the book “Daisy. It All Starts Here”.

Joe is a wealth of Daisy knowledge. During the visit, he gave us background information, history, and even a few trivia tidbits on all things Daisy.

Upon entry during normal business hours and after paying a small admission fee, the tour is a self paced experience. The quests have the choice of a self-guided audio tour or a 47 page tour book available as a guide.

In the entry way, there is a time line display featuring many recognizable Daisy airguns from vintage to modern.

The second display, consists of a lot of information on the beginning of the all metal airgun. Daisy’s history begins with the founding of the Plymouth Iron Windmill Company in Plymouth, Michigan in 1882.
Displays of pre-Daisy airguns, including airguns from 17th, 18th, and 19th centuries are cased for display. Next on display from the late 1880s is a wooden prototype of the Markham air rifles. The Markham is credited as the first commercially successful BB gun.

Along the tour, there are several interesting items of Daisy’s long history such as the Buck Rogers debut at Macy’s department store, to Charles Bennett’s travels around the world to begin to sell Daisy’s outside the US in 1907.

The history of the Red Ryder is very well documented at the museum. There are numerous displays containing many of the Red Ryder models made over the years. The displays also contains production dates, features, and materials used on each airgun. Did you know that Red Ryder’s produced prior to 1977 have the Red Ryder logo engraved on the left side of the stock? In a marketing decision, it was moved to the right side. That’s just one of the interesting facts that can be learned during a visit to the Daisy Museum.

Up until the 1960s Daisy manufactured only air rifles. In the 1960s, Daisy produced their first air pistols. The pistols display is impressive and contains many unique Daisy prototypes as well as production models in the collection.

In 1960 Daisy produced its fifty millionth airgun. This airgun, a model 98 with a special gold plated barrel also resides at the museum.

Not only vintage airguns are on display. Many of Daisy’s more significant airguns from the 1990s and 2000s are on display. Along with some of the more obscure models such as the VL using caseless ammunition to the .22 caliber rimfire marketed under the Legacy brand.

I’ve only touched on a very few items that are within the Daisy Museum. Along with the Daisy airguns, there is ad artwork, signs, the first Daisy paintball gun, the military drill rifle Daisy makes for the Army, Navy, Air Force and Marine JROTC units, and more at the 29 different display areas.

There’s also a few surprises to be found, during a visit, make sure to stop by the rest room to wash up.

The last stop in the Daisy Museum is the gift shop. It’s well worth the time to stop and browse for collectibles. The gift shop also serves as the factory outlet store where all kinds of bargains can be found on Daisy airguns and accessories.

During our visit at the museum, Joe gave us some insight into the workings of the museum. It is a 501c3 non-profit business, and works diligently to create and market limited edition collectibles, charges admissions, and solicits Friends, memberships and donations. All income is devoted to meeting operating expenses and making improvements to the collection and displays. Joe also went on to say that the Daisy Museum board believes that the museum needs to have and manage an endowment, the annual asset improvement of which would eventually entirely underwrite its operating expenses. And this would ensure that, beyond a shadow of doubt, there will always be a Rogers Daisy Airgun Museum, giving tours, preserving and protecting history and perpetuating the fun of collecting and shooting airguns. Visit their website or give them a call displayed below for more information on becoming a Friend of the Museum. 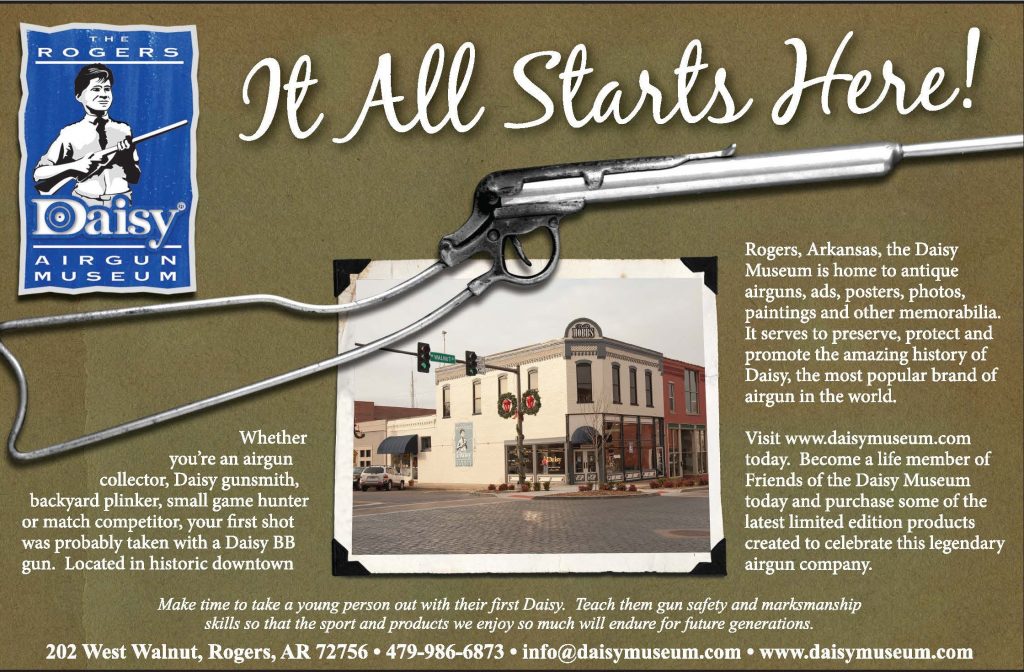