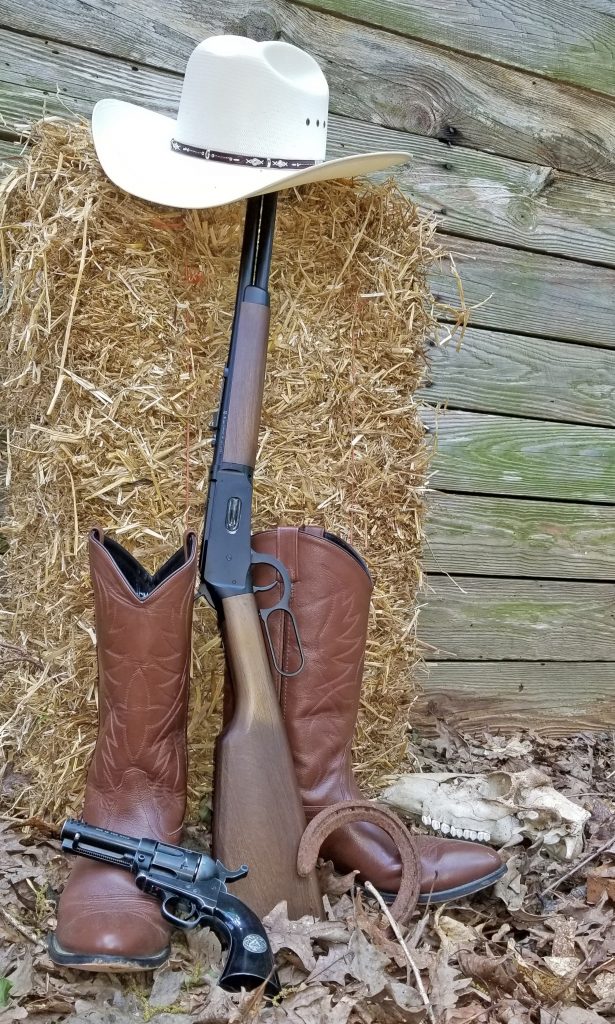 Modeled after a Winchester lever action rifle, the Legends Cowboy air rifle looks and functions similar to the real thing. While the stock and forearm are a synthetic wood grain plastic, it looks very much like wood. Most of what you’d expect to be metal is, with the front sight being the exception. The rear buck-horn style sight and elevator are both metal, as well as the saddle ring.

Before using the airgun, I’d suggest first reading the owner’s manual, especially the section on how to install the CO2. Tools are not needed to remove the butt plate, just your thumb, pushing on the button and a twist counter clockwise will loosen it. Housed on the inside of the butt plate is an Allen wrench used to tighten and loosen the CO2 charging screw. After the charging screw is removed two 12 gram cartridges are inserted pointing in opposite directions. The charging screw is then installed to pierce the CO2. On my sample of the Cowboy, at times, only one of the two cartridges would pierce. One CO2 cartridge always had a big piercing hole, while the one facing the rear only had a dimple where it tried to pierce.

Like other Umarex products, such as the Peacemaker, a BB is loaded in the “primer end” of each metallic cartridge. The Cowboy features a functioning loading gate to load up to ten cartridges in the tubular magazine. A word of warning, you’ll probably lose a few of the cartridges over time, as the Cowboy can aggressively spit the empties out of the receiver and onto the ground where they tend to bounce off in different directions. I found that I tended to load only three, not ten cartridges into the airgun. It seemed easier to keep track of each spent cartridge while it was ejected.

Out of the box, my Legends Cowboy air rifle’s, action was stiff. Over time, the lever action and feeding mechanism eased up and smoothed out. That was due to a few thousand BBs being fired out of the rifle, which is showing some authentic wear marks. I’m sure, in time, it will look more and more like the rifles seen in the old Westerns. Speaking of BBs, steel BBs flew out of the barrel around 620 fps, while Dust Devil BBs were about 640 fps.

Cycling the lever action, is just plain fun. During use, I did not encounter any failure to feed or failure to load situations. A couple times, after ejection, the cartridge flew up in the air and landed back in the receiver. A quick twist of the airgun cleared the cartridge and simulated what could happen with an actual firearm.

After a bit of use, I learned that I could also fire .177 caliber pellets. Loading the pellet, in the same way as loading a BB into each cartridge was simple and easy. Yes, the Umarex Cowboy has a smooth bore barrel, but shooting pellets reduced the chance of ricochets and opened up a new world of what could be used as targets. Using pellets for accuracy testing, tin cans at 10 paces was not much of a challenge. But empty CO2 cartridges at that distance were more of a challenge and more entertaining.

You can setup your own backyard cowboy action shooting scenarios. With action gong targets, loading the Legends Cowboy with Dust Devil ammo or pellets reduce the chances of ricochets (often heard in the old Westerns). Combine that with cowboy boots, a hat, six gun, and hay bales, you can feel like you’re on the prairie with the Duke or helping Lucas McCain in North Fork.

The Legends Cowboy is a fun gun. If we had a “Replica Airgun of the Year” award, it would definitely be in the running to win. Stay safe, and as Lucas McCain, the Rifleman said “A rifle’s a pretty good friend if it’s used right.”