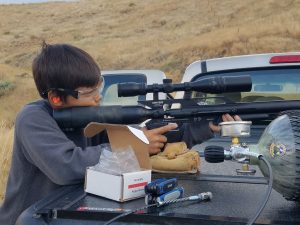 Attending SHOT is always the highlight of the year. It’s not just checking out new products that are being introduced. It’s also making new friends. Instantly, these new friends feel like old friends an we lose track of time chatting. One of our new friends is Derek Fong of the Idaho Fish & Game Department. Derek recently led the charge to allow airguns to be used for hunting in Idaho. Below is part of the conversation between Tim and Gordon Smith as they talked to Derek in the press room during SHOT.

AH: Could you tell us about the work you’ve done in Idaho related to airguns?
DF: In Idaho, the way we have our regulations, we didn’t go smaller than .357 cal for deer, antelope, mountain lion, and wolf. You can obviously shoot other things with it such as coyote which is not a game animal. Anything that’s actually game, you have to get a game tag for it. Other than the aforementioned four animals, elk, bear, moose, big horn sheep, or anything else those we recommend .45 caliber or bigger. We started the real rigorous testing of airguns, about three years ago. So we had to go through the commission, show them ballistic gel, penetration, expansion and what not. Airguns are not firearms so we said to people who a hard time relating, that we are recommending a minimum of 350 foot pounds. So, we don’t have to hunt like we do in our traditional muzzle loading season which requires 100% lead, no sabot, no ballistic points. In Idaho, when it comes to airguns, we have no bullet restriction, size, make of a bullet, weight or anything like that, so it’s a pretty spirited airgun program.

AH: Three years seem like a pretty fast track.
DF: We did fast track it. I started the department four years ago, moving from California, bringing my knowledge. I moved out because, I spent years trying to defeat the lead bullet ban in California. We were never going to win that fight because of the commission staff, five to two; five non-hunters, to two sportsmen’s groups, so we lost. As you know, California went 100% non-lead for any kind of hunting, as of January 1st. So I went to Idaho. I was recruited to bring knowledge, we did not want that to happen in Idaho. The commissioners were very pro-active and said that we want to seek out the knowledge from the industry on airguns. At that time people were saying “Airguns?” They were thinking of the $99 break-action gun from a big box store. So getting them educated about these airguns, we brought them out there, we showed them ballistics and then they got to shoot them. We shot them up against sub-sonic .308’s. They approved it as of June 1st 2019. It falls into what we call “Short Range Weapons” season. You can shoot muzzle loader, archery, shotguns, pistol, so airguns fall within that. Because airguns in Idaho are not considered a firearm, there are very few restrictions on them. They can be shot with moderators; pretty much the sky is the limit, other than what the caliber is.

AH: What we find very interesting is that you guys went “Whole Hog” right away. Other states have limited what can be hunted with airguns.
DF: We knew that. We had done some homework. We had some help from the airgun community. We saw what research Arizona and Texas did. We don’t have as much of that negative pressure that you may see in other states and we were looking for ethics and ethical kills. We recently did a comparison of the .45 out of an airgun next to a 45/70 at 100 yards. We had a guy who was an expert with a 45/70. He said mine is powered by gun powder and has a longer range. When we look at the effective range at 100 yards, he was immediately sold on it. He said he never though that airgun EVER had that potential. He had no problems, saying he’d take an elk any day, at 100 yards or closer using a .45 caliber airgun. The way Idaho regs read, we only tell you what you can’t do. People will call us and say, it doesn’t say we can hunt a turkey, or quail, or whatever. The whole airgun hunting is opened up and clarified, like small game hunting with airguns, so .177 to .30 calibers. In our regs, it will say you can’t hunt quail, you can’t hunt turkey. Or that the gun you have to use to hunt quail or turkey has to be a firearm that shoots multiple pellets, like a shotgun. And they say “Why?” But the underline is that an airgun is not a firearm in Idaho. We did an Idaho state seminar for all enforcement and employees, trying to educate them. We are talking muzzle energy when we are talking about centerfire stuff, and now, all of the sudden, we are talking about airguns, and talking about foot-pounds. They want to compare airguns to centerfire.

AH: Apples to oranges.
DF: You’re right. And it’s not the same. I tell them, you are propelling that projectile by air. It’s got its limitations. We have a lot of folks in centerfire now, wanting to shoot 1000 meters shots, I say “This is not a 1000 meter gun”. It’s never intended to be a 1000 meter gun. That’s why it falls in our short range weapons season. You could shoot an airgun in normal open season, but now you are up against rifle shooters. Now you’ve cut down your odds. In Idaho, we have archery season, we have muzzle loading only season, and we have general season. General season, you can shoot with anything, but why would you go shoot a deer with a bow when you know you are up against a guy with a 30.06? Is there ever going to be an airgun only season? At this point in time, “No”, for big game, we put it in the short range weapons season. Those guys have to compete against crossbows, shotguns, handguns, something that has limited range.

AH: How did you get acquainted with airguns?
DF: When I was doing our research, we looked at certain models and did not meet the minimum caliber requirement, we wanted to start with .357 caliber but a lot were .30 caliber and smaller. We looked at AirForce, and they had some of the bigger calibers. They met the minimum requirement that we were asking for, at least 350 foot pounds, or greater. AirForce was very accommodating, and helped us out doing the demo. Making a hunting gun, not a target gun, we had certain requirements. There are manufacturers that did not like it because a lot of their guns don’t come up to that standard. When we did the demo, we did have an Airbow, and that was an item that we did not approve. It may come back. They said why not .30 caliber, instead of .357? We looked bullet expansion. Number one, it was foot pounds of energy. We did not write 350 foot pounds in stone. It’s recommended. So if you are at 340, 325, then we have to preach ethical shots. That’s a hard thing to do in a state like Idaho when guys are trying to shoot a 1000 meter shots. Airguns can shoot in any season, other than archery. The other thing that we said in the regs was PCP, no CO2, the only thing we allow springers on is small game.

AH: This sounds like you were heavily involved from the “get go”. What was your experience with airguns? Did you grow up with airguns or did you do a crash course on airguns?
DF: Well, I grew up with the same kind of airgun that I think most people do. Either a CO2, or a Sheridan, or something like that. But, PCP was definitely something that I needed to understand. Everyone sees PCP and says “You gonna walk around with that tank on you?” The tank is fine for the range. What sold us on it, is that we have lots of scuba shops. We have to tell people that the cleaning is a little different. You can’t use any solvents. They ask “Why?” then you tell them about the O-Rings. I think the more confusing part of it is the bullet size. I got introduced to 400 plus grain .45 caliber bullets. What I find interesting about airguns is that some guns use .452, some use .457. Why can’t everything just be the same? I think Chris, my son, shot his deer with a 475 grain bullet. He may have very easily killed with a 425 grain bullet, I don’t know. Now that we’re done with the big bore, we are now shooting and experimenting with the smaller stuff. In Idaho, we have ground squirrels. What we tell people is, the slogan is: “If it’s got a heartbeat, you have to have a license.” Shooting these high performance PCP guns, Chris has got to shoot .25 caliber and it’s amazing. He says he has shot suppressed .22 LR, but he likes the idea of charging up an airgun, and just keep feeding it. The report of a gun or recoil does not bother him. He shoots a .308 AR-10. For him to shoot a .45 caliber airgun, he still wears ear protection; he shoots a full size 12 gauge Browning for trap, so to shoot the airgun is no big deal. He realizes what the challenges of using an airgun are. A lot of the parents that we are introducing the airguns to, like that fact that they are not real loud. They like that the airguns are skeletonized and are not big and bulky. Ammo is cheap and they can practice more. Chris has been a great ambassador for shooting sports programs. We’ve embraced airguns, because we see the potential there. When we got introduced to the AirForce guns, I know we can ethically kill a big game animal with that gun. When we created the regs, we wondered if we could find a deer or elk within 100 yards, and we could. The kids in Idaho have the opportunity to shoot either sex. They can shoot does, it’s generally about a 95% harvest. So we took Chris out to hunt deer and see if he can take one with an airgun. He had to wait. There were shots out at 150 to 175 yards away. And I said “Wait and see if we can bring them in a bit. We want a good clean kill” The guys we went out with, were a little skeptical, to the point where they said “Do you want to take a .243 out as a backup?”. I said “No, I don’t think we are going to need that.” Chris “stoned” that deer with his first shot. The shot was at 88 yards and just dropped it. The adults who were with us were more impressed, not about Chris’s shooting, but about the power the airgun actually has.

AH: Thanks for you time Derek. We’re sure our readers will find this information useful.